All 26 verses of Psalm 136 end with the same phrase: “For his mercy endureth forever.” Here is one of the verses from that psalm, which celebrates the Lord’s power to deliver the children of Israel from captivity in Egypt:

With a strong hand, and with a stretched out arm: for his mercy endureth for ever.
(Psalm 136:12)

This image of a “stretched out arm” also appears in the writings of Jacob. After sharing the allegory of the olive tree, which emphasizes the duration of God’s patience in working with His children, Jacob makes the following plea to his readers:

I beseech of you in words of soberness that ye would repent, and come with full purpose of heart, and cleave unto God as he cleaveth unto you. And while his arm of mercy is extended towards you in the light of the day, harden not your hearts.
(Jacob 6:5)

I get several messages from this passage:

Multiple times, subsequent prophets in the Book of Mormon evoked the image of arms of mercy:

Today, in the Saturday afternoon session of general conference, Elder Gérald Caussé spoke about Bertel Thorvaldsen’s Christus statue. He suggested that one reason this statue may be so meaningful for members of The Church of Jesus Christ of Latter-day Saints is because it reminds us of the Savior’s appearance on the American continent, in which He invited the people to come forward and feel the prints of the nails in His hands and in His feet. 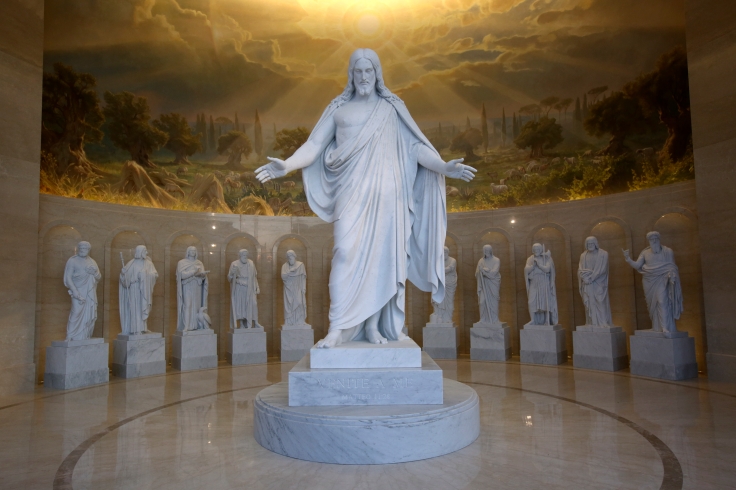 This sublime scene is the climax of the Book of Mormon. The entire ‘good news’ of the gospel is contained in this image of the Savior tenderly extending His ‘arms of mercy’ to invite each individual to come unto Him and receive the blessings of His Atonement.
(“A Living Witness of the Living Christ,” General Conference, April 2020)

Today, I will remember that the Savior’s arms are extended toward me and toward all people. I will turn my heart toward Him and invite others to do the same, knowing that He is able and eager to heal us and to save us.