Skip to content
25 And the first fruits of repentance is baptism; and baptism cometh by faith unto the fulfilling the commandments; and the fulfilling the commandments bringeth remission of sins;
26 And the remission of sins bringeth meekness, and lowliness of heart; and because of meekness and lowliness of heart cometh the visitation of the Holy Ghost, which Comforter filleth with hope and perfect love, which love endureth by diligence unto prayer, until the end shall come, when all the saints shall dwell with God.
(Moroni 8:25-26)
I like to look at this kind of passage graphically: 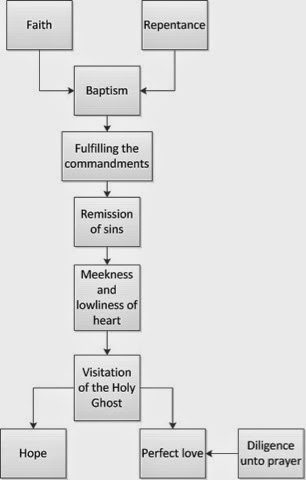 A few observations:
1. Faith, hope, and charity appear in this formula.  Faith is at the beginning of the process, while hope and charity are the final result.  Charity in particular needs to be maintained over time through prayer.
2. The first principles and ordinances of the gospel are featured. Faith and repentance jointly lead to baptism, which ultimately leads to the visitation of the Holy Ghost.
3. Baptism does not directly result in a remission of sins. Instead, it leads to the fulfilling of the commandments, which in turn brings a remission of sins.  When we are baptized, we publicly attest that we are determined to follow Jesus Christ and keep his commandments. The act of making that promise increases our determination keep it. But it is in the keeping of the covenant, not just entering into it, that our sins are washed away.  (See also D&C 76:51-52, which also inserts keeping the commandments between baptism and the remission of sins.)

4 thoughts on “Moroni 8:25-26 The First Fruits of Repentance is Baptism”