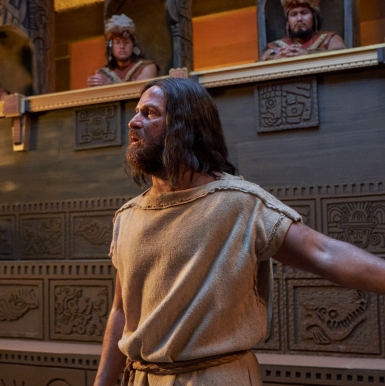 Abinadi’s sermon was prompted by a question. Not a sincere, heartfelt question from an earnest seeker after truth, but an adversarial question from a priest who wanted to discredit him. The question was this: What is the meaning of Isaiah 52:7-10?

Abinadi had been imprisoned because King Noah believed that his message of warning was dangerous to his regime. Noah and his priests kept the people in submission by constantly declaring “vain,” “flattering,” and “lying” messages to their people (Mosiah 11:7, 11). Abinadi’s words, in contrast, sounded revolutionary: Danger was coming, and the people, including the leaders, needed to repent.

Isaiah 52:7-10 speaks of a messenger from God who brings good news—a message of piece that causes the people to unite and rejoice. The undercurrent of the question was that King Noah and his priests were like the messenger in the passage, while Abinadi was not.

During the sermon, Abinadi was protected from the king’s guards by the power of God. After the sermon, King Noah was inclined to set Abinadi free, but his priests convinced him to execute the prophet. As he died, Abinadi shared a final, fearless testimony.

Here is an outline of the sermon, with my takeaways: Abinadi teaches the priests of King Noah.

Here are some additional blog posts about Abinadi’s sermon:

Blog posts about King Noah and his priests

Blog posts about internalizing the laws of God

Blog posts about the sorrow and suffering of the Savior

Blog posts about preaching the gospel of repentance